Every Wednesday, three self-employed friends and I get together for co-working. We’re all successful, entrepreneurial women, so feminism and women’s roles in various industries is a common thread in our conversations. Okay, I’ll be honest, that’s a common thread in all conversations I have with all people. But anyway, I had ensconced myself in my friend’s living room to do an interview while the rest of them were working away in the kitchen when I saw, mid-interview, an email pop up in my inbox from a co-co-worker in the other room with the subject line, “Non-dude show host.” 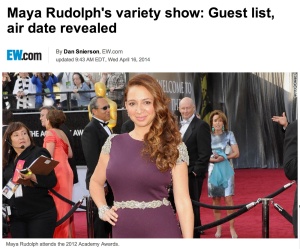 So the forthcoming The Maya Rudolph Show matters. It matters because, while all of those dudes are delightful, they are so homogenous it’s icky. It’s icky because their homogeny implies that there are simply no women, LGBT comedians or people of color who are equally delightful, which is just not true. Especially when these three major late night turnovers have happened so recently, the networks can no longer blame decision makers from other eras for the straight, male whiteout in late night television (don’t try and tell me about Chelsea Handler. Progress on a celebrity gossip channel is not progress), they’re actively propagating the belief that comedy is for straight white men.

Women on the Supreme Court are important. They’re important for a lot of reasons (see United States v. Windsor, among others), but they’re important role models for young women who want to study law. Hillary Clinton is important for women in public service. Sheryl Sandberg is important for women in business. But we can’t be satisfied with a smattering of female role models in a few industries. Just as women only had the choice of secretary or teacher 60 years ago, we’re still passively telling girls which careers are open to them, and which are not. Would-be female tech entrepreneurs? Try and find a role model. Female comedians, good luck. The next 25 years are locked in.

The Maya Rudolph Show is significant because the door on the next quarter century of mainstream entertainment leadership just closed last week on women and people of color. Maya Rudolph, who is both — in addition to being just as hilarious, delightful and super as Fallon, Colbert and Meyers — was somehow able to crack open an escape hatch. Late night doesn’t usually start at 10pm, but then again, it doesn’t usually have a woman of color at the helm either. And that will mean a lot to the next generation of funny little girls who might never have otherwise imagined themselves in entertainment’s highest league.

So let’s all watch it.

To celebrate, let’s all enjoy this bit of wonderment that happened this week on the extremely male-dominated Comedy Central channel from the exquisite new show, Inside Amy Schumer. This is what progress looks like.